English through Movies+ intermediate 2 and higher 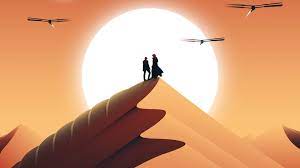 Join Nicholas in discussing the inspiration for the movie adaptation of Marvel’s comic The Eternals, while also learning about Greek & Roman Mythology and discussing myths & legends from students’ countries.  Not only that, we’ll discuss The Natural Resource curse and colonialism as it relates to Dune, as well as looking at the cinematographic choices Denis Villeneuve made in bringing Frank Herbert’s epic story to the screen.

Welcome to the new students that started with us t

Our new session started off with a BANG this week

🌭 Our students have mastered the art of the Aus

Intermediate classes checking out ACMI and the Nat

Exploring the city and making friends🙂

Living the good life on the Yarra🙂

Hi everyone 👋 ! These are the activities we hav

This is the last session of the year! and we are

Welcome all new students!🎒 Are you ready for th

Did you know using idiomatic language in IELTS tes

Be different in your own glorious way! 🚀✨ E:

Congratulations to our UPATH students who graduate

🎄You can help warm hearts by making a donation

👆This is our ILSC Toronto 🇨🇦 student Facu

Download it now by clicking the link on our TapLin